Sparkverb is UVI’s entry into the competitive native reverb market. With a clean design and a very straight-forward approach to algorithmic reverb, Sparkverb is a plugin that privileges workflow without compromising the sound quality. First appearing as a module in MOTU’s MachFive 3 Sampler (which is coded by UVI), Sparkverb now arrives as a standalone plugin with the same highly flexible polymorphic algorithm capable of delivering very distinct reverb sounds.

Instead of relying on different algorithms - or even separate plugins like Lexicon - for different reverb types, the Sparkverb uses a polymorphic engine that can create a vast array of different spaces. From the very big and long and modulated ethereal hall to a short and almost dead room, the Sparkverb delivers quite well. I personally found that it really shines on shorter reverbs and this is a reverb that runs well when inserted directly into a channel with just a small amount of wet signal mixed in, besides the usual full-wet aux send scheme. It also does plates very well, as it can be heard on the “EMTribute” preset that pays homage to the iconic hardware manufacturer. Sparkverb can be shaped both into prominent and larger-than-life spaces and subtle, invisible reverbs, and it’s really a versatile piece but that also shows some personality and a quite distinctive sound character.

Sparkverb is surprisingly simple and at first glance you’ll find a plugin that’s very economical, with a restricted set of controls and a big knob for the arguably most decisive reverb parameter: decay time. Other knobs will control reverb size, shape, width, high frequency rolloff, controls for high and low frequency decay and their respective crossover filters, and simple sections with two knobs each for modulation and diffusion. Diffusion can be set to low, medium and high and there’s a light/dark option under the modulation section that controls the overall tonality of the reverb. The knobs are all very sensitive and they feel like a big macro of under-the-hood functions, so the user has to remind himself that “a little goes a long way” when working with this processor. Even though small changes in the knobs can drastically alter the sound, operating and tweaking the Sparkverb is easy due to it’s straightforward design, and to make it even easier you can grab the decay time graph to tweak the timings and frequency regions if you’re not into knob-twisting. There’s also a text strip at the bottom of the plugin that explains its functions as you hover the mouse over them. Sparkverb also offers two interface sizes and brings us a very interesting preset management system that is very close to what Arturia does, with a colors and dots on a map that the user can click to select presets and also click and drag points to generate new sounds in between those preset coordinates. Wrapping it up there are the random and mutate buttons for when all your ideas are gone. Random does what it says, but mutate just slightly changes the settings you have, allowing for some subtle variations of a given setting or preset. There is a lock function for each parameter, so that allows you to preserve some desired settings while mutating and randomizing, keeping things under control. 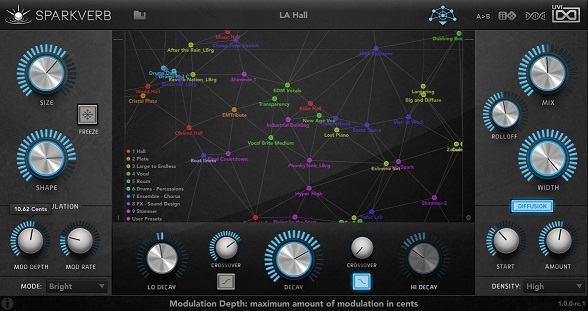 Sparkverb's preset manager allows for fast and interesting results and you can zoom in with the scroll wheel and get settings that are in between each preset.

One small issue with the Sparkverb’s workflow is the lack of input/output controls, so you’ll have to compensate that accordingly - likely cranking up the output since its reverbs tails might fade a bit faster than usual. In fact, when doing big spaces I had to dial longer decays than usual. The “freeze” button can do some interesting tricks and turning it on and off doesn’t cause any clicks, so you can mess with that without any worries. Some contemporary touches like a drive (or some sort of distortion) and a more featured equalizer (there’s only the HF rolloff) would also add to its sonic palette. Nonetheless, this plugin is flexible enough to fit in a variety of sounds and the elegant design makes it easy to achieve very rewarding results, nonetheless an “expert” mode would be a nice addition or at least some “modes” for the core reverb sounds such as plate, hall, chamber and room. On the other hand, the presets do a good job in order to give you those basic sounds and can get you acquainted with Sparkverb’s idiosyncrasies.

UVI’s slick approach wouldn’t be any good if it wasn’t delivered with a hefty dose of computing performance. Fortunately the Sparkverb goes very well on both performance and stability, and you can easily run a bunch of instances on any modern computer with rock-solid stability. My aging Intel i5-2500k managed to run a bunch (more than 10) of instances with high sampling rates on busy mixes, and the Sparkverb was definitely not causing trouble as I headed into the deep waters of processing. It’s really very well optimized and also very stable.

The provided documentation (a 21 pages PDF file) covers the operations with the plugin and basic guidance on how to set it up on most popular DAWs, and there’s also a nice introductory video with a 10 minute long walkthrough of the plugin. There has been one patch so far, and UVI has a good history of updates and provides a responsive (and fast) support service.

Ever since Sean Costello and his amazing and very affordable Valhalla DSP reverbs came into contention, the native reverb plugin market has never been quite the same. Lexicon has also slashed their prices and Eventide has recently kicked back its plugin production with a new (and less expensive) approach, so getting a “big brand” sound is affordable these days. Names such as Exponential Audio (created by former Lexicon designer Michael Carnes) and 2CAudio are also worth mentioning, so we have a very well-populated reverb scene which is ultimately great for us!

In that regard, Sparkverb faces a fierce competition. At 199 USD Sparkverb doesn’t come as cheap as some of the offerings out there, but it sets itself apart by establishing itself as a high quality reverb processor and perhaps one of the most friendly to use. If you just had enough of tweaking and want to work with a simple yet effective tool, this is it. However, if you’re way too passionate about reverb parameters, Sparkverb might not be your cup of tea. If all care about is sound, then be sure to give it a try.

More often than not, I am using room mics and compression to bring out ambience and dimension in a mix. My ears are very sensitive to digital reverb, and because of this I have a hard time finding a reverb that works. I can't stand pingy, chilly, digitally, phasey reverb. I find that almost all reverbs are good at one thing, and it's not a surprise to me that most of the time that one thing is long decay halls and plates. Big sounds tend to be the focus of most reverb manufacturers - but the real test is the small spaces. It's hard to find a reverb that does short decay well.

The Sparkverb is different. It's very flexible, very musical, and has all the tweak ability that one could need in a very user friendly GUI that is separate from the rest of the UVI Workstation framework. As you hover over the knobs it describes in details what the functions are, making it easier in the decision making process to dial in a sound.
Sparkverb does small spaces very very well. While most plugins start to fall apart in small spaces, Sparkverb seems to have a wealth of fine tuning an already good sound to your liking. The presets are a good starting point, offering pristine and realistic spaces. I was able to dial in 2 or 3 very good sounding small "vocal booth" type sounds and pick the best from those three. That is something that I've really struggled with using other plugins.

Speaking of presets, the preset blending feature is a whole new world of experimentation that allows the user to meld and morph reverbs into unique spaces and soundscapes. The "web" of presets is very fun, and fast paced. Though this is a great feature, I have not felt a burning desire to dive deep into this aspect of the plugin just yet - the basic presets have been wonderful so far and leave me feeling like I could spend a great deal of time just using those as a launchpad for fine tuning the verb to the song. Sparkverb is definitely not a one trick pony, but a swiss army knife of luscious reverbs.

Overall, the sound quality is top notch. Though I feel my myriad of other reverb plugins that I've accumulated in search for something that works will still have their uses - Sparkverb will be on my mixes more often than not due to it's polished, pristine, realistic, and smooth characteristics. UVI did a great job with this one. This is a reverb that you can use on lead vocals with confidence. I'm glad I no longer have to mix without Sparkverb.