Roland A-49 by johnnyv

I would think pretty much everyone who uses a DAW also uses a Keyboard Controller.
MIDI is a huge part of creating tracks with a DAW and you don't have to be a keyboard player to use one.

I've been recording with MIDI since 1985. ( Atari 1040st). I can play well enough to get by with a bit (or lot) of editing afterwards. I'm not a synth player, mostly I record traditional keyboard parts, Piano, Wurlitzer, Leslie Organ and Drums.

My first keyboard was a Korg Poly 800. My second keyboard which I still have, is a Roland PC180. Basically the same layout and size as A 49. Note: it was made in Italy and the A 49 is now made in China. After 25 years of playing snare drum the D3 key is now triggering at full velocity. I was becoming tired of having to edit that one note.

I bought it at a music store where I did try all the others they had on display. In the below $400 Price range, the A49 had the best FEEL. Some were just plain cheap feeling. Even though I'm no professional keyboard player, I do like to play a real instrument, not a toy.

Hooking it up was not as straight forward as I would have liked.The A 49 has both a DIN MIDI port as well as the USB "B" port. But because it gets it's power from the USB this gives you little choice but to use the USB. To use the MIDI port you would need to power the A49 with a wall wart with a type "A" female port and then a standard printer type USB cable. (USB Type A to B )
I'm reluctant to power up a brand new device I just paid $140 bucks for with a dollar store USB wall wart. Call me fussy, but I like my wall warts to be official.
So minus points for not including a power supply.

The next issue was with the driver installation. It took a few attempts to get it to stick. Funny my Yamaha DTX drums didn't need drivers. So your not going to be able to move this keyboard from computer to computer without fussing with the drivers. It is not plug and play.

Once Windows 7 recognized the device all was good and it showed on my list of MIDI input devices.

I really liked the new improved interface. Like my old PC 180, the MIDI Channel and Program changes use the Function key combined with the labeled keys. Easy to control a rack of sound modules from the keyboard. And the Joystick remained the same as before. But a lot is now added.

The transpose and octave shifts have dedicated controls and give you visual feedback. Their ease of use makes it very performance friendly and overcomes the limitation of only 49 keys.

There are 2 buttons that give you 3 performance modes. In Function mode the keyboard switches to sending midi control data only, notes are not sent. In Super Natural Mode the keyboard will control a Roland Super Natural Sound Module. If both Buttons are pressed together you are in MIDI Visual Control Mode which changes the default assignment of the knobs and buttons. You'd need to read the manual as this gets deep! 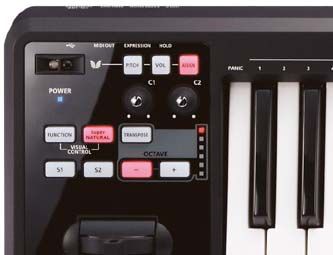 Further midi control is executed with 2 assignable knobs and 2 assignable buttons. Any MIDI control parameter can be mapped to these 4 controls. There is one more MIDI control feature that is cool. The D-Beam Sensor. It has 3 buttons Pitch, Volume and Assign. The pitch sounds like a theremin. Volume could be very handy and used like an expression pedal. And the last button could really be put to strange uses if you are a midi power user. Example it could control cut off, filters, envelopes, efxs etc.

Bottom line is they have included full control for inputting to your DAW and for live players. And in true Roland style, made it so complicated you'll need to keep the manual on hand.

I found it strange that there was no controls offered for Sonar's Transport? This keyboard is also sold under the Cakewalk brand and includes Sonar X1LE. You figure they would integrate with each other. But this is OK as I have a better plan. I use a USB footswitch ( my review- PCsensor Footswicth


It has both hold and expression pedal foot switch jacks.

Overall for what I do it's the perfect little keyboard and fits in a small space on my side table. I really like it's smooth feel and find an improvement already in my playing. It is well built and might even last me the 25 years the first one did. It comes in Black or White for those who need their home studio gear to look smart.