This is an inexpensive, low-latency USB audio interface with some unusual features for its price range.

I’ve been wanting to rip my old cassette tapes of original songs for a long time, so I picked up a Roland Tri-Capture because I knew it was designed with that kind of activity in mind.

It’s a compact, odd-looking little device- it actually looks like a miniature Atari 400 computer with a photo-negative color scheme. It has an XLR-only jack for a mic, a TRS-only jack for guitar or line, and a pair of unbalanced RCA aux inputs, as well as stereo TRS outputs and a 1/4" headphone jack. 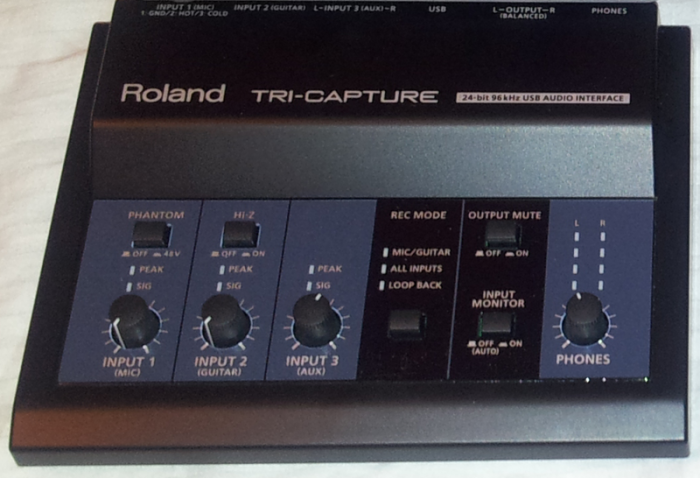 It offers three input modes: “Mic/Guitar,” where only the first two inputs are recorded, “All inputs,” where all inputs are recorded in a 2-channel stereo mix, and “Loop back” which records all inputs like “All inputs” mode, but also routes your computer’s system audio into the interface so you can, for example, sing along to the soundtrack from a game or a YouTube video. In “Mic/Guitar” mode, the two inputs are delivered to the interface on separate channels (L/R stereo or dual mono), but in the other two modes, both the Mic and Guitar inputs are panned across both channels.

Some notes about “Loop back” mode: In order for this to work, I had to go into the Sound control panel of Windows and set the Tri-Capture as my default device on the playback tab. When you do this, Windows routes the audio of any application that doesn’t offer audio device selection to the device of your choice. DAWs and other apps that are ASIO or DirectSound aware aren’t affected. Once I made the Tri-Capture my default playback device, I was able to record everything (mic, guitar, aux, and PC audio) all at once.

Each of the three input channels (Mic, Guitar, and Aux) have their own input gain controls; if you only need to record on your aux inputs, for example, you can just turn down the other two channels all the way. The Tri-Capture does not appear to offer a way to adjust the level of incoming PC audio in Loop Back mode, unfortunately. I’m not sure whether there’s a way to adjust this at the Windows control panel level; you might have to just hope your source application offers a way to manage the signal volume.

The interface supports full duplex 44.1 and 48kHz operation and half duplex 96kHz (you can either play or record in 96k; you can’t do both). The sample rate controls are little switches on the bottom of the device; all other controls are buttons or pots on the top of the unit. It also supports both hardware and ASIO direct monitoring. Like most interfaces in its price range, the Tri-Capture is fully USB bus powered (so no battery operation or iPad compatibility)

In terms of audio latency, the Tri-Capture performs surprisingly well. I normally record at 44.1kHz/24-bit with a 256 sample buffer (that’s my “set-it-and-forget-it” configuration), and I compared the combined input and output latencies reported by Ableton Live on my laptop to those of three other interfaces I’ve got sitting around: The Focusrite Scarlett 2i2, Zoom R8, and the Roland Duo-Capture EX.

Below are the results, from best to worst. Note that in every case I had to pick “as close to 256 samples as possible” because all of these interfaces have jacked-up control panels that either don’t let you specify “powers of two” buffer sizes, or don’t accurately pass your selected buffer size to the driver (my screenshots will show what I mean). I list the sample buffer sizes after the interface name. Note that the performance gaps between the interfaces are way beyond any effect of the buffer size deltas. (In other words, if you normalize the numbers to a 256 sample buffer size, the performance gaps are still obvious, especially when you consider that the faster Roland interfaces had larger buffers than the slower 2i2.)

What I like about the Tri-Capture: It’s small, super-affordable, and does exactly what I needed for my tape-ripping needs. Also, the loopback feature is pretty handy to have in such an affordable little device.

Minor complaints: The input selector is a digital toggle switch, rather than a physical switch, which means that when the interface defaults to Guitar/Mic mode whenever you plug it in, or it wakes up from sleep. I’ve forgotten to toggle it into “All Inputs” mode a couple of times as a result. Also, the “peak” indicators on the device are more like “kinda loud” indicators; they go red well before your input signal risks being clipped, which makes adjusting an optimal input level a little more of a pain than it needs to be. Also, I don’t think it’s possible to adjust the incoming PC volume at the interface in Loop Back mode.

At only $100 USD this thing’s a pretty good value for someone with a mic/guitar setup, or people who simply need cheap, reliable AD/DA.

Due to the very specific input configuration, folks with external stereo synths or grooveboxes might be able to use the aux inputs with the right cables and adapters, since many synths tend to have unbalanced outputs anyway, but the Tri-Capture’s more aimed at singers, guitarists, and home audio users. 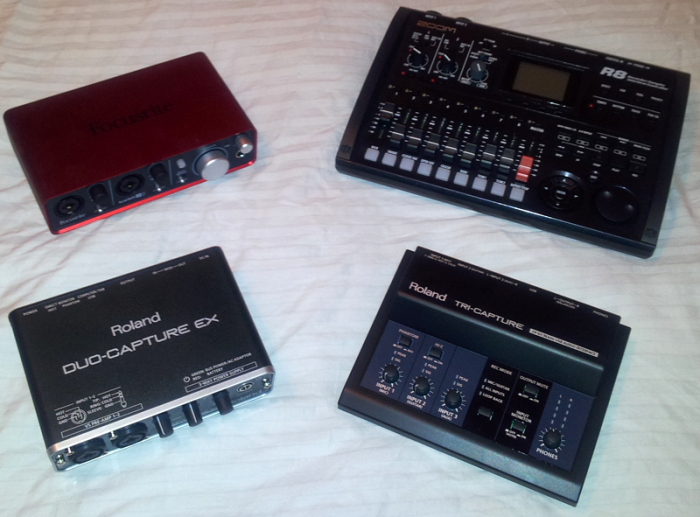 Janky 2i2 control panel. The buffer slider is sorta confusing in its use of “ms” as a configuration metric. Using samples instead would help users mentally separate the buffer concept from actual ASIO latency: Janky R8 control panel. It lets you select buffer sizes in traditional “powers of two” increments, but as you can see in the Ableton Live settings, what you pick in the control panel doesn’t necessarily translate to the interface: