A simple, powerful reference tool that allows you to switch between the audio you are working on and up to nine tracks in an instant.

Sample Magic's Magic AB
A simple, intuitive plugin for monitoring reference tracks within your DAW
A Common Need:
Checking your mix against reliable reference tracks is one of the most revealing processes you will perform, whether you’re at the start or finish of a project. It highlights invaluable information about the peculiarities of your monitoring environment -- and also serves as a much needed palate-cleanser and reality check for everything in your mix from loudness levels, EQ curves, low end management, vocal levels and so on.

The classic approach has been to have your DAW running in tandem with another playback source (CD player, IPOD, etc) through a monitor controller that allows you to easily switch back and forth. However, the most affordable of these units tend to hover around $300 -- admittedly a little spendy for the budding professional or home recordist and perhaps just plain unnecessary for those of us working in simpler monitoring environments.

An Elegant Solution:
Enter Sample Magic’s Magic AB, a “utility plugin that allows you to switch between the audio you are working on in your DAW and up to nine reference tracks with the click of a mouse.”

At a thrifty $39.35, Magic AB is an AU, VST, RTAS and AAX plugin that, “sits on your mix bus (or individual channels), allowing instant switching between your current project and the reference material in pristine, transparent quality, regardless of the processes already on the mix bus.“ 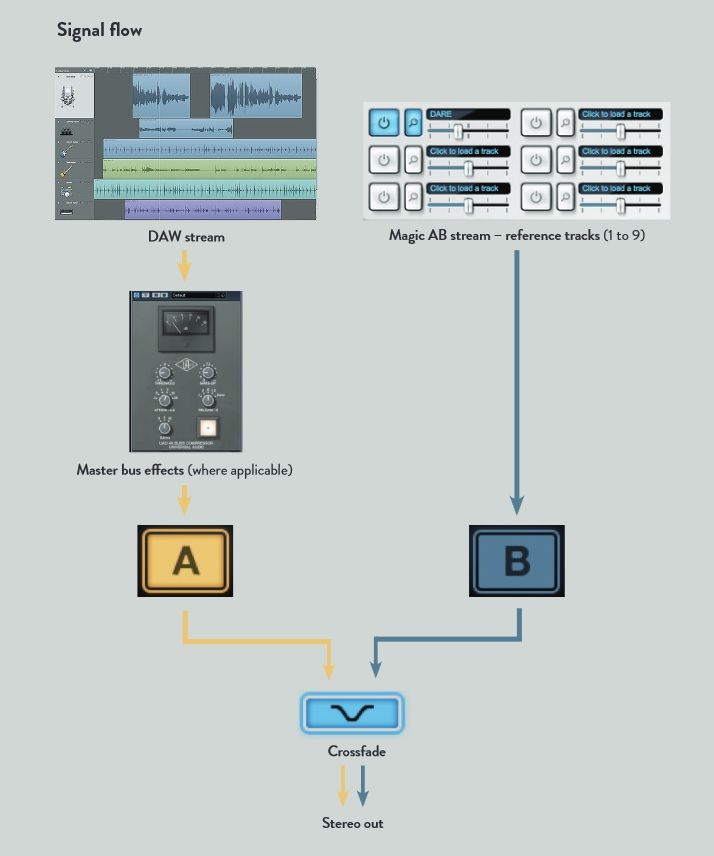 Notable Features:
Beyond serving as a software substitute for a hardware input switch, Magic AB has some awesome tricks up its sleeve -- including built-in peak/RMS metering and the ability to trim the volume level of the DAW stream and the reference tracks independently. Both features greatly increase the accuracy when assessing EQ and dynamic differences between your mix and.
commercial tracks.

Perhaps the best feature though is Magic AB’s ability to independently loop a section of the reference track and a particular section of your mix. For example, this allows you to loop the choruses of both and seamlessly A/B back and forth between them while making your adjustments.

In Practice:
I have been using Magic AB in nearly every mix I’ve done since the product debuted. I absolutely adore it. One of my favorite applications towards the end of a project is to place Magic A/B at the end of my Master Buss chain (after any compression/limiting), then place Izotope’s Ozone 5 immediately after it. Using Ozone’s Matching EQ plugin, I can then use Magic AB to plot the average EQ curve of my mix and compare it to that of my reference mixes. This is a great visual tool when troubleshooting a balance issue or performing a little “poor man’s mastering” on preliminary mixes.

Cons:
The only initial issue I had with the plugin was discovering that the reference track files needed to be at the same sample rate/bit depth as the project. Meaning, if my project was recorded at 96kHz/24 Bit, I couldn’t host a 44.1kHz/16 bit Wav file or MP3 as one of my reference tracks. An easy work around for me was to simply import my reference tracks into my DAW and re-export them at 96k-- which took about 5 minutes. I then had two folders of reference tracks on my desktop: one for 44.1 files and one for 96k.

The good news is that this issue has been fixed in the plugin’s most recent update. Additionally, I’m happy to say that Sample Magic’s support team was incredibly accessible when I encountered this issue. They responded to me within an hour of my initial email and followed up with me several times with fixes and updates throughout the following week. That kind of service and support is just another reason that I can wholeheartedly recommend this plugin.

Summary:
At around $40, Magic AB is not only one of the cheapest you will ever buy, it's also one of the most useful. It may not be the sexiest of plugins: it obviously doesn’t impart any magical character, or perform any new processing tricks. It does, however, allow you, and even encourages you, to better utilize the most powerful tools you have at your disposal to make your mixes sound better-- your ears!

P.S. The fact that the new update is already available as AAX 64bit is just the icing on the cake for Pro Tools 11 users.

I purchased my copy March of 2017 after recommendation from my friend who owns a world class A room kind of studio. On his location festival recordings he uses this plug in to mixdown the days tracks on phones. They are coming out sounding great when he puts the headphone mixes on his big Ausberger monkey lip monitors.

The demo videos say it all.

I like the ability to preset 9 songs at a time to be compared to my mix. I have some presets with mastered grammy grade girl songs, male songs, rock songs, americana songs..... and some with samples of drums and guitars.

I can instantiate many copies of the VST plug-in; one on the main two-bus and others on the tracks.

This is a very very powerful tool that can help you know if you are getting to that next level you aspire to reach.