TK Audio BC1mk2
When you buy products through links across our site, we may earn an affiliate commission. Learn more
Sign up to our email list here for deals, giveaways, reviews and more in your inbox!

TK Audio BC1 MkII by andreaeffe

We usually all skip manuals, don't we?
Some are just bad – some even useless. Some littered with constant attempts at humour, some crippled by painfully wrong translations. Some overcomplicated like the proverbial rocket science not-so-handy handbook, some overelementary as if they were aimed at some time-capsule fetched caveman, finding audio and Lego equally challenging.
But some are good.

TK Audio BC1mk2’s manual is a simple, laser printed 6 A4 sheet affair, complete with hand signature of owner & founder Thomas Kristiansson’s (the T and the K in the company name, of course).
And, beyond the perfectly readable and technically apt explanations of controls or the really quite good setting examples it provides, it really, really hits the nail on the head on several quotable points.
I’ll get to a couple further on, but the first one is a simple sentence on page 3, stating: “The main purpose of the BC1mk2 is to act as a buss compressor and it does it very well”.
Indeed, Mr.TK – it does.

This second incarnation of the now very successful BC1 does not stray far from the original mission it set out for, i.e. replicating the legendary SSL 4000 series in-desk “quad” buss compressor , with an added twist and finesse or two.
It still is a black 1U rack unit, with an internal PSU based on a sturdy toroidal transformer, IEC mains plug, XLR balanced ins & outs and an unbalanced TRS jack for external sidechain detector access at the back of the unit. The front panel has undergone some minor aesthetic-practical change, with a thin white line encircling all the controls, plus finer legending and numerical markings around the dials. Other than that, what the mk2 version brings to the table is an “improved VCA circuit for slightly lower noise”, a “new faster gain reduction meter” and internal jumpers for use with unbalanced gear or connections, compensating for the 6 dB level drop that one might occur into – the quotes are according to TK Audio’s official website, as there is no mention of the differences with the original BC1 in the manual (and obviously so, as one holding the manual evidently owns the mk2 unit).
Having used the original BC1 before, I have to say it already was a pretty quiet and fine unit, so any slightly lower noise now is probably in the realm of the measurable, but not audible. The meter is indeed a bit more responsive now, but it’s nothing to write home about.
So – no drama.
On the front panel you’ll find the usual SSL style controls for threshold, gain make-up, and stepped/switched ratio, attack and release . The aforementioned twists & finesses already come into play here, as compared to the original SSL unit, the BC1mk2’s ratio features additional super gentle 1,5:1 and violent “Hard” ratios, attack features additional “Ultrafast” and slower 60 mS and 120 mS times, and release features a faster 50 mS time.
Not content with that, Mr.TK & co provided for a switchable high-pass filter for the compressor’s sidechain, set at 150 Hz, an external sidechain switch, a “L+R” switch summing the sidechain signals to mono before hitting the detector and thus making for a hypersensitivity to the centre of the stereo signal information, and a “Blend” pot, along with a “Straight mute” button, enabling the ever trendier wonders of parallel compression to be achieved within the unit itself, without the need for external rerouting, signal multing and patching, with the nice touch of being able to cut the uncompressed signal at the touch of a button to either compare the with/without effect, to check what the compression is in fact doing, or just to make sure none of it is bleeding through in any way.

So how does it sound?

Here’s where we could skip back to the manual’s aforementioned quote and say it can be agreed to in full. The BC1mk2 sounds brilliant. Does it do the SSL thing, and “glue”, “gel”, “…” (insert sticky fluid of choice here – possibly avoiding profanity) the mix? Yes, it definitely does. But it sounds less gritty, and perhaps a tad less aggressive than an SSL, less brutal and without the high-mid scream of the almost just-as-legendary Alan Smart C2 incarnation of SSL buss compression. What the BC1mk2 does to the sound, colour-wise, is very subtle, and it is more of a gentle lift in the high frequencies, but without any harshness – a very subtle euphonic glitter. An arguably more modern, more pure sound than the distinctive SSL 80s & 90s vibe.
Can it “smack”, bring those snare drums in your face and make transients come alive while lifting low level information? Yes, it definitely can. The 30 mS or 60 mS attack times, with the classic 2:1 or 4:1 ratios, and even the gentler 1:5 ratio, and coupled with either the auto release or the 100 mS and 50 mS release times seems where this compressor likes to live, dwell and work the most. And it’s one of the best around, with stereo imaging brilliantly preserved, sometimes ever so subtly enhanced by that almost subliminal top end lift.
It also works very well as a gentle drum buss compressor, barely spanking the peaks or letting them through with slower attacks and lifting up the RMS level.
I personally didn’t care too much for the “Hard” ratio and the “Ultrafast” attack time, which can have some use in squashing things brutally (especially in parallel compression mode), but aren’t fast or brickwall enough to be an absolute, peak-stop or digital clip safe limiter, and don’t offer the kind of brash colour one can expect from e.g. an Urei 1176 or even 1178 when performing similar tasks. Again, the manual does not overblow these features, and actually goes as far as to honestly mention that in many cases “more coloured compression is often used”.
As much as my first instinct was to complain about the sidechain high-pass filter being fixed at 150 Hz, in use it seems to work extremely well, perhaps due to the frequency choice, or the nature of the filter itself and its’ components, or the gentle 6dB/octave slope, or whichever combination of the above. Fact is I kept resorting to it, and it appears to do a far, far better job than say the “Big” switch on my Drawmer 1968 ME, or the “contour” switch on several DBX units.
The parallel compression feature, with the “Blend” knob and the “Straight mute” switch, is a godsend, and that alone would be worth almost the entire asking price of this unit. With all ratios, and all settings, it works as it should, and offers a great plethora of flexibility.

The white pushbutton switches (closely resembling those on 80’s Studiomaster mixers & outboard!) are a bit difficult to interpret, even in a well lit room, and an LED of some sort or a mechanical in-switch indicator like in old Orban units would have been of great aid.
The VU meter very democratically spreads out its’ legending every 4 dB, from 0 to 4, 8, 12, 16 and 20 dB of compression – but, given the fact that most of the action on this unit is bound to happen within the first 2 to 6 dBs, if not even in the “barely kissing the needles area”, I’d gladly trade the resolution at more extreme gain reduction values for a larger and more detailed scale in the first part. As it is, faster but not lightning fast as I stated earlier, it’s more of a rough guide meter than a scientific instrument. But, once you get to know it, it does no harm.
No harm also comes from the general build looks of the BC1mk2 – the build LOOKS, mind you, not the substance of things, which is of definitely high quality components. So it retains the slightly DIY feel of the original BC1, albeit slightly more refined, coming off looking as something your very apt & nitpicking dad or cousin with a metalwork shop might have racked for you.
But then again – it is so very reasonably priced, one cannot but give a high five to TK audio, and quote their little manual once again: “Congratulations on buying one of the most transparent stereo buss compressors ever made / Smooth and transparent compression will never go out of fashion”.

TK Audio BC1 MkII by BN1studio 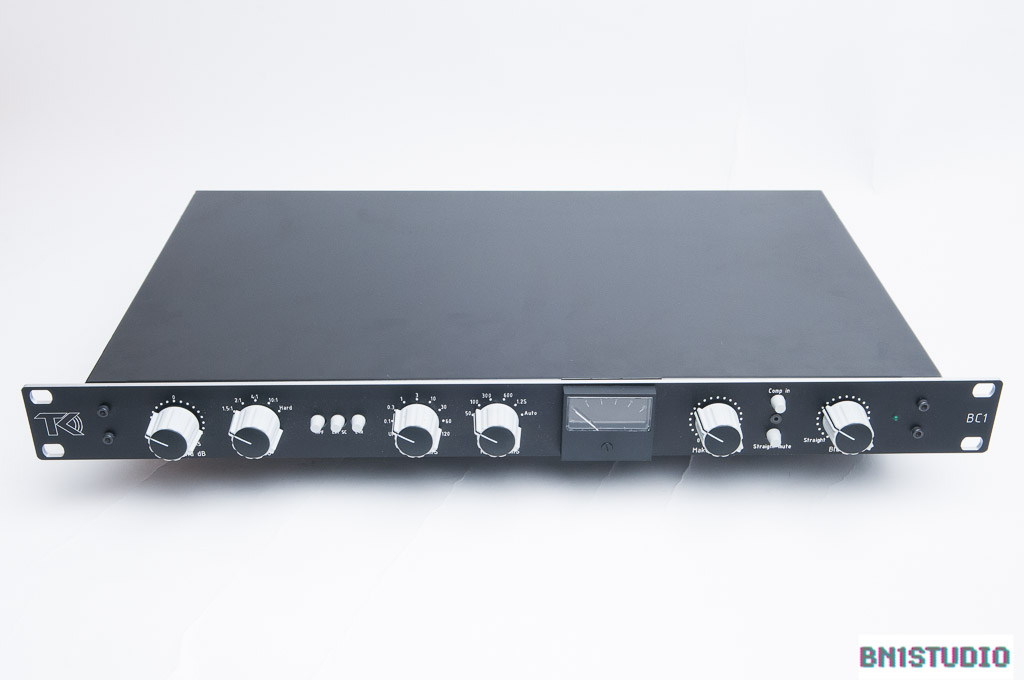 The TK Audio BC1 MkII is one of the many takes on the SSL bus compressor concept. The original SSL Quad Bus compressor was across the output buses of the SSL 4000E. If you knew your way around the patchbay, the rear channels allowed the compressor to be keyed by the back buses, but most used the compressor the same way – hit the On button, 4:1 ratio, slowish attack and tickle the compressor by a couple of dB. Used that way, the compressor gave a tight, punchy result that suited the overall sound of the console

The SSL compressor became a product in its own right in a 1U rackmount box, in the original version with dbx VCAs then in the current Superanalogue version. Alan Smart, ex-SSL installation & development engineer, produced his versions of it and there are numerous other versions, homages, reinterpretations and clones

TK Audio has taken the super-clean route with the BC1. It uses the famously-transparent VCA chips from THAT Corporation and adds lots of flexibility with multiple compression ratios and sidechain manipulation. SSL chose 4:1 as the lowest ratio, but TK starts with 1.5:1, and offers 1.5:1, 2:1, 4:1, 10:1 and Hard to give a greater range of effects

The BC1 mixes the dry (uncompressed) and compressed signals via a Blend control to give variable parallel compression and achieve the right balance of smoothness and punch in a final mix. Having the blend adjustable on the front panel – and a mute button for the dry signal – transforms the BC1 into a proper mixing tool

TK Audio describe the BC1 as providing the “Magic Glue” for mixes. Once you start balancing mixes with a bus compressor it becomes easier to pull the balance together to make a cohesive mix

The BCI works extremely well as a bus compressor, sounding smooth and polished. Even at low compression ratios it pulls up details that can get hidden in busy mixes and, by working the compressor harder and changing the dry/compressed blend, it’s possible to make the mix punch hard without becoming obnoxiously compressed

The BC1 takes the SSL buss compressor idea to a new level. Using the highest-quality VCAs ensure the signal remains clean, but the real cleverness is in the sidechain. The sidechain defines how the compressor will respond, and TK adds flexibility here with an external input, two detector setups and a high-pass filter to prevent the low end pumping the mix excessively

In an ideal world you’d have one of these, an original SSL compressor with “Gold Can” dbx VCAs and an Al Smart C2 but, if you could only have one, I think the TK BC1 would be a good choice
Review this product Get the facts
Review Tools
Search this Review
Show Printable Version
Email this Page
Gearslutz.com LTD - UK Company Number 7597610 (England & Wales).
Registered Office - Suite 19, Maple Court, Grove Park, Maidenhead, Berkshire SL6 3LW.