A UVI Workstation collection based on the Casio CZ series phase distortion synths.

Growing up in New Jersey in the 80’s and 90’s, Casio made those terrible beginner keyboards parents who didn’t know the first thing about music would go to Radioshack to buy their kids. In fact, I remember having a VL-Tone in the 80’s and squeezing and distorting the speaker just to hear it make strange sounds before it eventually could take my terror no more and died. But I digress. There was certainly nothing cool about Casio keyboards. Or at least, so I thought at the time.

Somewhere in the last decade or so, I started hearing about the Casio CZ series. These synths were often compared to Yamaha’s DX-7’s which, as far as I was concerned, was yet another strike against Casio. However, where the Yamaha’s DX-7 used FM synthesis the Casio CZ series used another digital synthesis technology they call Phase Distortion. I didn’t know much about it, but from what I could gather, it was supposed to have a very mid-80’s to early-90’s sound.

Fast forward to early-2016 and UVI have released a Casio CZ-based library for their UVI Workstation plugin called Cameo. The UVI Workstation plugin itself can be downloaded for free from the UVI site, while Cameo is a commercial expansion pack. Think of UVI Workstation as platform for sample-based instruments, that allows for enough flexibility in terms of the UI layout that you can really start to feel like you’re playing a standalone instrument after a while versus just a Kontakt library with a simple, scripted UI on top.

Being a little more sonically open-minded in my mid-30’s, I decided to check Cameo out.

Cameo is billed as a “Phase Distortion Suite,” which is a fancy way of saying, “you’re getting three completely different CZ-based instruments.” All three synths share some common features: amp/filter ADSR’s, LP/HP/BP filters, unison, effects, modwheel assignments, a compliment of effects, step modulator, LFO’s, etc. There’s some slight variations in each instrument, but just to be clear: these aren’t sampled presets with ADSR’s added in; you’re getting a full compliment of parameters. 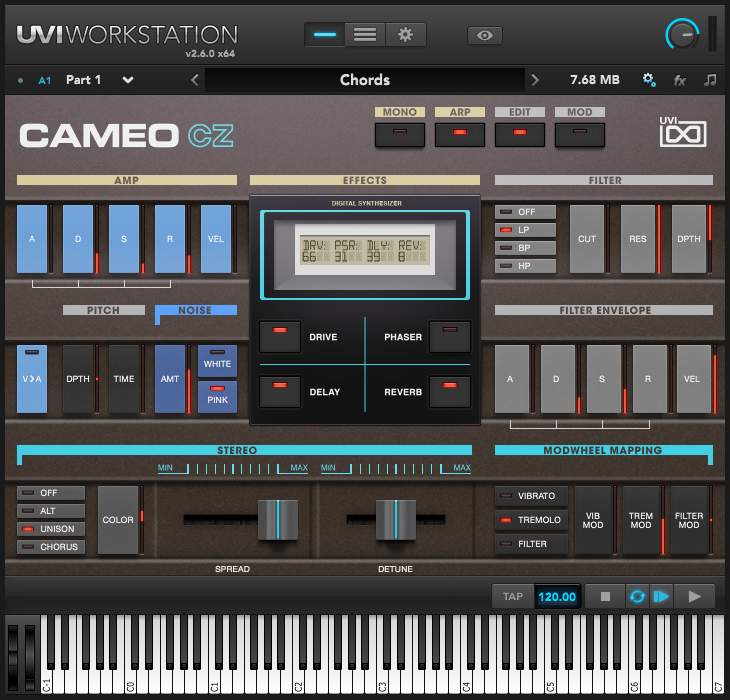 First up is Cameo CZ, which includes a great selection of sampled CZ series sounds. The waveforms for each sound are linked to the preset, but you’ve still got plenty of flexibility in terms of filter settings, pitch envelope, ADSR envelopes, noise, modwheel settings, effects, an arpeggiator, and a whole lot more. 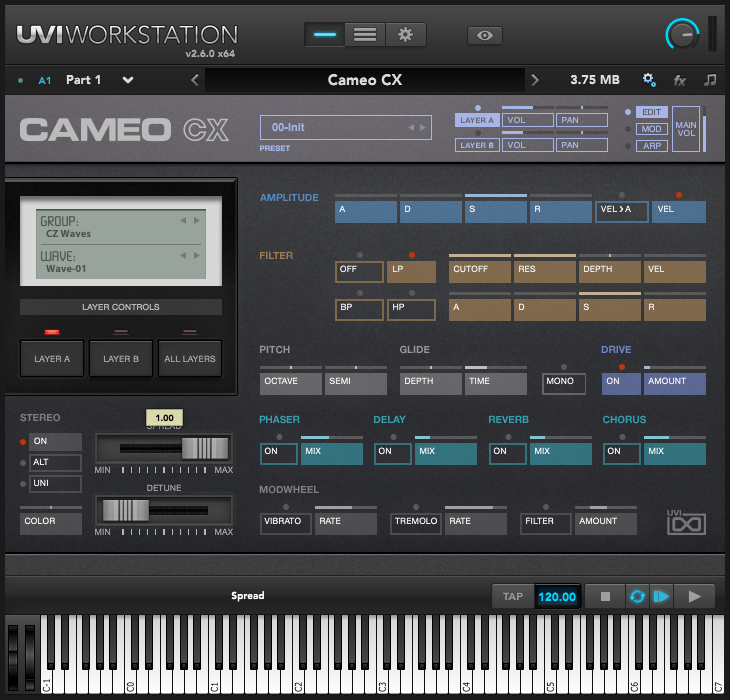 Cameo CX can be thought of as two CZ style synths stacked on top of each other. This is the first of the two more traditional instruments in this package in that everything here is fully editable. You can start with a Pad sound, tweak the basic waveforms, tweak the envelopes, turn on the arpeggiator and end up somewhere completely unrecognizable. The raw waveforms are sampled, and categorized into things like “Synth Bass -> Reso Bass” which makes finding a good starting point quite easy. As this is a dual-layer instrument, you’ll find yourself coming up with cool sounds by stacking two wildly different layers, which the presets take good advantage of. 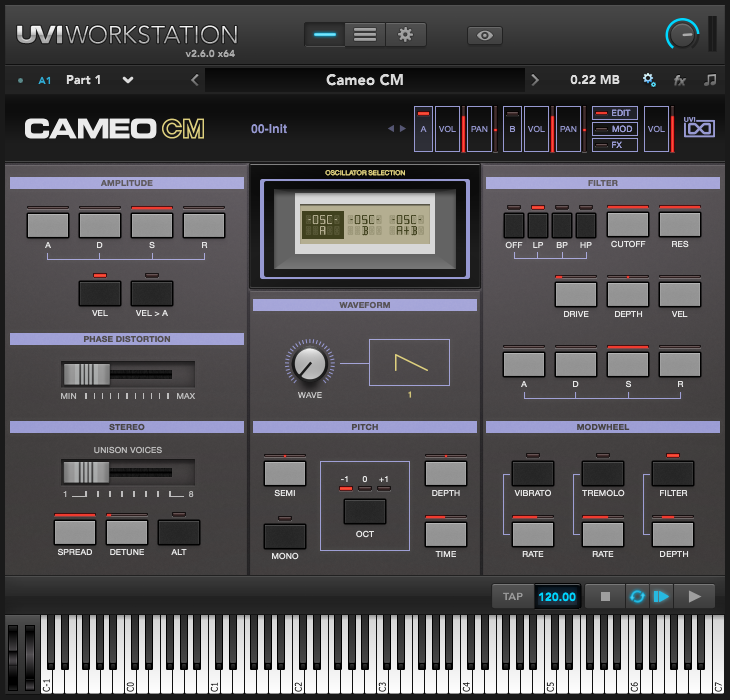 Last up is Cameo CM, which is the most “raw” of the three instruments. Here, the training wheels have been taken off and you’re working with raw waveforms. The manual indicates this is accomplished via a combination of the “wavetable oscillator and DSP...from Falcon.” In short, this one probably feels the most like a full blown synth. It’s also a dual-layer instrument, and shares a lot of the same features of the others.

I’ll be honest, on more than a few occasions, I’ve meant to load up Cameo CM (for example) and ended up loading up Cameo CZ, so I’ve often wished the names were a bit more descriptive.

Between the three instruments, Cameo comes with 400+ presets covering all the usual ground. About 220 presets are in Cameo CX, with CZ having just under 150, and Cameo CM with in the neighborhood of 80 presets.


Sound Quality - 5/5: As to the sound itself, having never used a Casio CZ synthesizer (and not really being sure where I’ve ever heard one) I wasn’t sure what to expect. As a mentioned earlier, I only ever remembering hearing of the CZ synths in relation to DX-7’s, so I guess I was expecting something thin and a bit cheesey. I was pleased to discover that wasn’t the case.

Cameo is capable of very fat, buzzy, nasty tones, while also being equally well adept at creating beautiful keys and pads. In short: this isn’t very DX-7-like at all (in a good way). The presets are categorically excellent, and are usable as-is, while people more adept at programming will appreciate the flexibility to really dig in and edit patches on their own.

Ease of Use - 3/5: The aspect of Cameo’s three synths that I’m most critical are the GUI’s. Most parameter settings are often controlled by very thin faders that look at first more like on/off indicators than faders. When the UI gets busy, like on the step sequencer pages, you can have four or more different fader styles on a single page. After adjusting to the faders, I’d find myself instinctively clicking the Layer A and Layer B activate/deactivate buttons when I’d want to actually edit the layers. And it’s not like the bell wouldn’t immediately go off, reminding me where I needed to click, but my first reaction would often be wrong. Also, two of the three synths have their own preset browsers built right in, whereas Cameo CZ uses the main UVI preset browser. So these GUI’s could certainly have been more consistent and intuitive. That said, it’s all relative: compared to programming the hardware, the three Cameo instruments are much easier.

Features - 5/5: Each synth is packed with features and effects, and Cameo CM feels less like a sample-based instrument and more like a standalone synth. There’s not much else they could have crammed into this UI.

Bang for Buck - 5/5: You’re getting 3 unique instruments, with 400+ excellent presets, all of which sounds great. Hard to be disappointed here.

In an era where virtual analogs have been all the rage for the last 15+ years, it’s nice to see some less popular, but equally classic, synths get some love. If you’re looking for an alternative to your VA’s, and FM synths, but still want some 80’s/90’s style sounds, you owe it to yourself to check out Cameo.